Yak away here, please! This category is for random discussions, comments, and anything but the topics shown above.

anyone tried using scarpa f1 boots and just the dynafit toe pieces to telemark? I'd guess that if you used the Ti nose piece you'd possibly have the lightest tele setup with plastic boots ever

What about grinding the bill off tele boots and screwing fabricated inserts/drilling holes into the nose? would a threaded insert work or could you get away with just drilling into the plastic - dynafit boots all have metal housing moulded into the toe piece. Does anyone know if that's because the plastic's too weak or if the metal housing/inserts are part of the licensing from dynafit, i.e., you want to make dynafit boots you have to put these into your boots?

also, to create more of a park/piste type setup what about mounting two dynafit binding toe pieces one at the tip and one so that it connects at the bellows? You'd probably have to do a lot of grinding to the bindings and also building a shaped platform to fit around and accomodate the release mechanism on the underfoot binding. I'd guess there's more than enough room under the arch to fit the second toe piece if it's flipped around 180 degrees. Some grinding may be needed to fit the release tab under the heel - you'd probably have to release with the heel raised slightly to aid access. 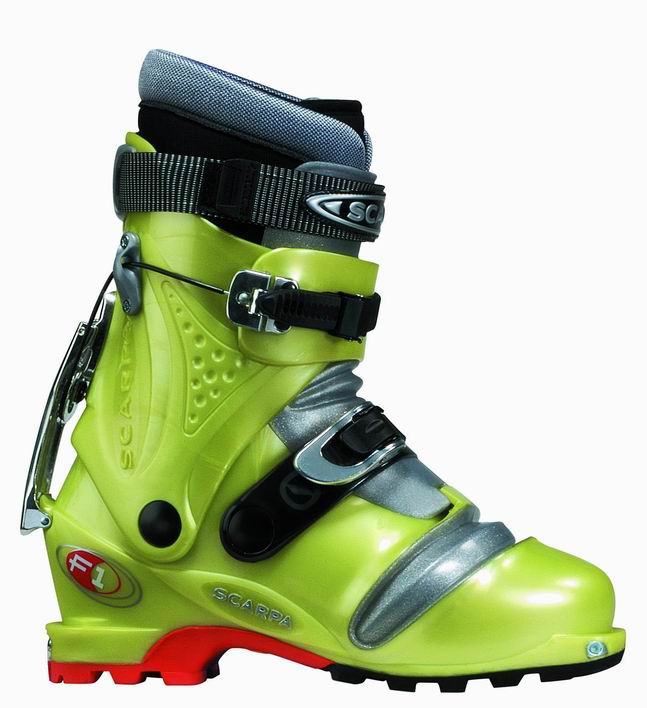 How you doin mate
If you someway could get it strong enough (wich is a long way to go with the dynafit for tele), i think there would still be a lot of problems. You must have some sort of resistance to the boot, the torsion stiffness would really suck, and most important: the rotational axis is wrong.

You have probably seen this but: http://www.telemarktips.com/TeleNews49.html
Top

How's it going? Thanks again for showing me your project - I'll have to start vacuum bagging this summer. Did you find those inserts yet?

I've got a pretty productive thread going over on t-talk with two guys who've experimented with tele turns on their AT skis/dynafits. Just out of curisosity do you know what last the F1s are based on (T-race, T1 or T2)? You'll have to explain the rotaional thing - do you mean it'll be like tele on NNN bindings and xc skis (now that's an interesting challenge but it can be done

). I kind of guessed that the torsional stiffness of the boot would suffer compared to Scarpa's more freeride oriented boots, after all it's made for rando' racing not alpine skiing efficiency.

At the moment I'm trying to find out
- what the release values for the toe piece is in ski and tour modes.
- if the metal inserts in the boots are structural in any way or if they're optional, i.e., could I just grind the nose off a tele boot and use that instead.

edit - yeah, I saw the NTN pictures on the web - looks pretty beefy but no release

It was great to have you here! Looking foreward to see your progress on the vacuuum. I haven't found no inserts (those little dded are really hard to track down).

Not shure on any of those questions mark, I suppose it's pretty close to the t2, I just answered on basis of my own experience with teleing the dynafits, pretty much like skiing a telemarkbinding with no resistance, (your knees hit the skis) a little linken-like experience, but without the torsional stiffness. When you lift the heels it doen't take much pressure at all to make it release, or break the binding. You don't get to bend the boot either, and that's kind of the pont of tele, isn't it?
Top
Post Reply
4 posts • Page 1 of 1