For discussions related to ski/snowboard construction/design methods and techniques.

hey!
i do almost every pair of skis with wood veneer now (i reduce plastics where possible...)my sidewalls are also of hardwood.
problem: the wood veneers don t stand teh edge abuse from the other ski so long. the veneer looks after some hours of skiing very battered. I beveld the veneer but this is not the option i am looking for.

On teh ISPO i had a chat with skilogik guy and he showed me that they now have a second (thinner) steel edge between top- veneer and fibre glass. I m curious how they do place this in layup. (They didn t tell me...) Is there a possibility to do this without milled top and bottom mouid cassettes? 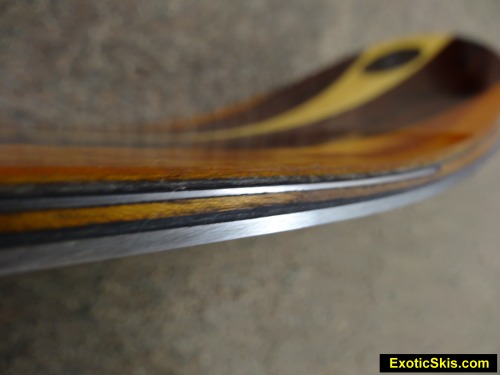 Have you sen the skis in person? It looks like al to me. Just lay it in there. During layup you will of course need tight tolerances.

I think its aluminum too like mm said. maybe sand and epoxy it to the sidewalls prior to layup?
Top

I experienced some chipping on my veneer top sheets too but doing that seems like too much hassle for me. I am just going to bevel the veneer down to nothing at the sidewall and live with whatever damage occurs. The beauty of timber is you can always just sand and recoat it with urethane.
Top

I've thought about this problem some as well. I think that a hip roof style sidewall would decrease chipping some. Something like a 15 deg bevel from the edge up and then increased to 30-45 at the top to set the top sheet back from the sidewall some. I've also thought about a round over on the top also. Or a full rounded sidewall like Praxis does might also work.
Fighting gravity on a daily basis
www.Whiteroomcustomskis.com
Top

I m not sure if it s aluminium or steel. but when I think of teh normal aluminium you get (Al2Mg3) or something like that, it s pretty soft, and wouldn t stand the abuse by a 48 rockwell steel edge much longer, i guess.
i did some 30° beveling on the last pairs, what reduced the damage a litte.

I ve seen a pair of skilogiks in real, the use this second metal edge and also do a flat beveling.
I really want to give this a try...maybe i ll try to work my sidewalls exactly to the steel edge before layup without overlappings on each side
Top

sir.organge, I'm with you on the reduced plastics.... The hip style sounds interesting. I checked my wood veneered skis and the chipping has been minimal on most of them. I've been doing a 15 or 20degree bevel with a little step over the edge, like a commercial ski.

The skis that got banged up the most were a pair I would leave in the ski room while teaching. Put 50-60 pairs of skis in a small room where kids just more/less toss their skis in there, they're gonna get banged up.
Top

I think the metal is there because the compressive strength of the wood is less than that of UHMW. Prevents more edge compressions.

Are you sure it isn't too low within the sidewall to protect from edge strike?

I think a number of things have and can be tried:

- edges mounted within the topsheet (Zai), but they still needed to address the coating they used (see their Facebook page, early doors)
- AL strips mounted along the topsheet (Endre, Lacriox)

This doesn't stop the damage, but it does make it equivalent to that suffered using plastic and if the sidewall angle/tip spacer is say ... 5 - 7 degrees, then you can simply increase the angle (just enough) at the end of the season. This means your client come back to you, you can clean up the damage and or re-surface the skis - no harm done.
Top

Hi,
First post here. I like the idea of a second layer of metal on the top of the sidewall for more protetction, but don't plan on being that ambitious when I do get to my first build.
My current skis ( Blizzard Titan Atlas ) have a layer of metal like that as well, and it seems to help a lot. Not sure if it actually is titanium or what, but it's keeping the abuse to the topsheet only and not the sidewall.
Looks like titanium and magnesium are used by Blizzard.. blizzardsportusa then /Technology/Construction.html
Aluminum would be affordable for sure and might be a decent solution.
-g
Top

anyone ever put a strip of guitar purfling or banding on the top corner, its just a thin strip of abs. But perhaps avoiding abs is the original idea. Some are made out of dense hardwoods also like blood wood, koa, cocobolo
Top
Post Reply
11 posts • Page 1 of 1

Return to “Ski/Snowboard Design and Layup”