Sooo.. I don't have much shop time between work, mini-ben_mtl, mountain biking and skiing but I'll try to get the ski building going this season again.

My projects this year are to give it a try to PU sidewalls, make a resort-only ski (groomers / hardpack), make a pair of skis for my brother who skis the Pyrénées in France (hard snow / tough skiing conditions backcountry ski), and a fat ski for me.. just for fun (and hopefully for a ski trip in BC this winter... fingers crossed !)

I'm starting with the resort ski + PU sidewalls, it will also be my first ski made with the help of the CNC.

Core blanks have been glued and I started the machining on the CNC, here are the first pics.

Cutting the groove on the CNC: 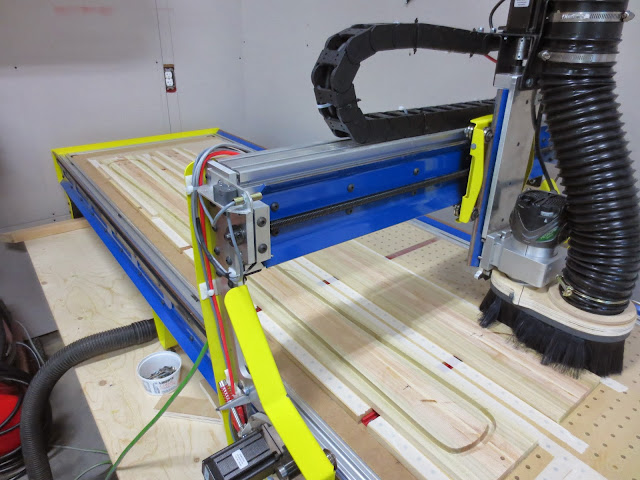 The 2 skis are done, they are slightly different though.. 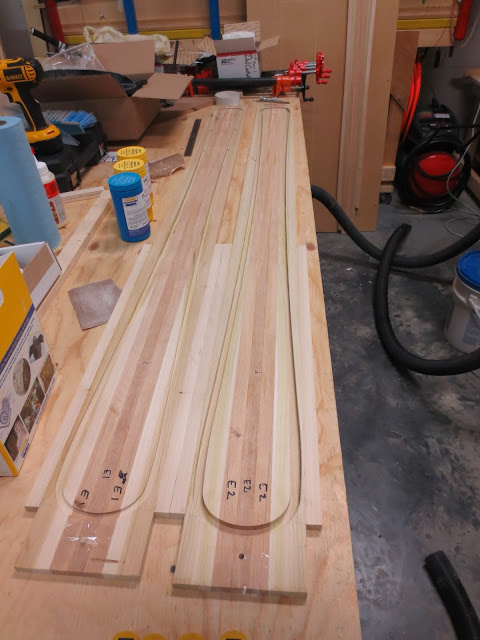 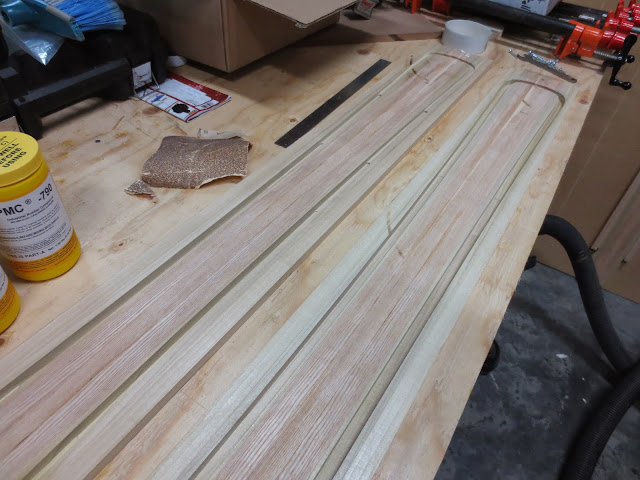 The ski on the right is the first I've cut : a 1/2in wide groove all around (8mm to the inside /4mm+ on the outside of the ski just in case of core shifting), leaving only a .5mm skin on the bottom.
The program was supposed to cut the 2 skis but we had a power shortage just when the router was jogging to start ski #2 ! pretty lucky !

Because of that I had some time to check a few things and decided I would make the 2nd groove differently.
I made some calculations and noticed if I was doing 2 times the same big groove I would not have enough PU for both skis.. not good !
So for the 2nd ski, I did the groove only 10mm wide (8mm to the inside, 2mm as a safety margin) but the big thing is the groove is not full depth all around.

I managed to make the groove depth the exact opposite of the thickness profile (+ some safety)... well it's not super exact since it's a "stepped" depth but it will definitely do the job. By doing so, my calculations shows a reduction by 40% of the PU that will be required.

The plan is to pour the PU, skim the cores on the CNC (or on the planer) to have a clean flat surface, drill the inserts holes and machine a shallow groove to sit the edges, then flip the cores and profile them...

Tomorrow I should be pouring the sidewalls, 48h curing time might set me to continue on the CNC on sunday.

Good work Ben. We leave 2-3 mm outside for buffer zone, and 8 inside for ski, 10 for a snowboard. Good luck, hope it they turn out sweet.
Top 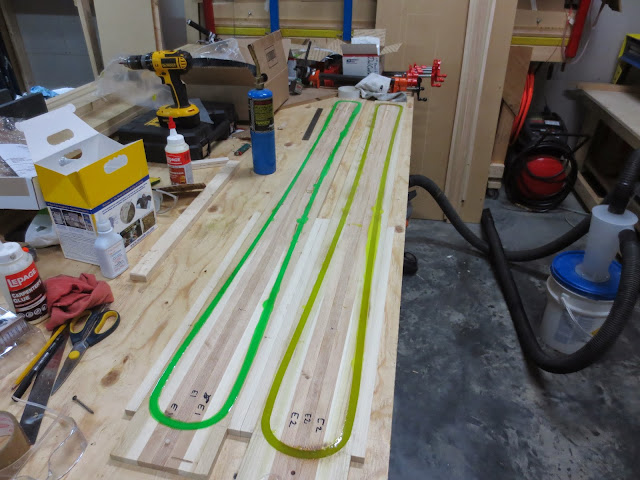 here are my conclusions :
- having an idea of the quantity is no easy task the first time you do that,
- when using "ignite" pigments, it's better to premix you color with some white : on the first ski (yellow / rigth on the picture) I only put the yellow pigment and I believe the final color will be transparent/amber/yellowish. Second ski I put a mix of white and green pigment -» nice bright solid green color !
- do not be too slow when flaming to remove the bubbles :p I expect the tip of my first ski to be a bit brownish...

Other than that it was pretty straight forward and it went OK I think. The part A of the product was harder to stir due to thicker viscosity.

If I take the plunge and decide to go for PU sidewall on all my skis I'm gonna invest in some higher precision scale (measuring 3grams of pigment is not that accurate on my kitchen scale) and also on a mixer... those 2 items will definitely be useful for the epoxy work too !

I didn't pay enough attention when programming the CNC and started profiling my first core in the wrong direction (tail / tail inverted)... I stopped as soon as I understood what seemed to be wrong.
Today I ran the corrected g-code, everything went OK but of course there's an area in the middle of ski where I'm missing some thickness ( a bit over 2mm where it's the worst).
Any idea how I can save that core ? it was already the smallest model I'm building.. so I can't fit a smaller core in it...
The 2nd core of the pair is still intact.

Fortunately those cores were leftovers from last year (someone wanted a pair, I started then the person said he had no money..) so my new cores with the PU sidewalls are still OK !
I'm gonna work on those ones now

A bad day skiing is always better than a good one at work...
Top

Good hint about adding white. I too found the ingnite tint to finish with a translucent effect. I'll try that next time
Top

Good hint about adding white. I too found the ignite tint to finish with a translucent effect. I'll try that next time

Adding white greatly reduces the translucency and makes the color more bright... but it's still a little bit translucent.

I think so too... not sure it's worth it though as I don't want to invest more money in a pair I won't be using myself (too small) and am not sure I can sell...


Back to my PU experiment :

The PU was cured (I think so), so I put the cores back on the CNC and machined the top surface flat (which in fact is gonna be the bottom surface of the core) + drilled the insert holes/counter-bores. 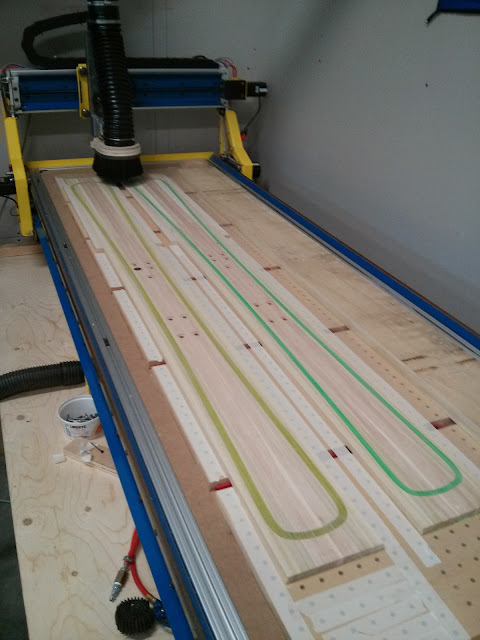 The black insert hole on the yellow ski is actually an insert I put there to check the accuracy of my hole...

I then flipped the cores 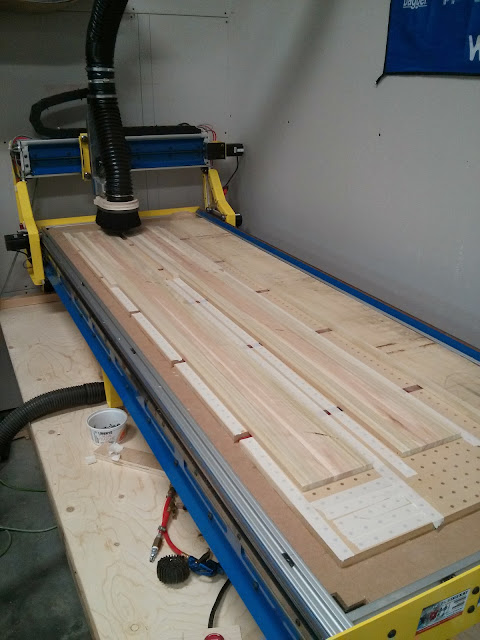 and only had time to make the roughing pass on 1 of the 2 cores since I made a "dry run" of my g-code... 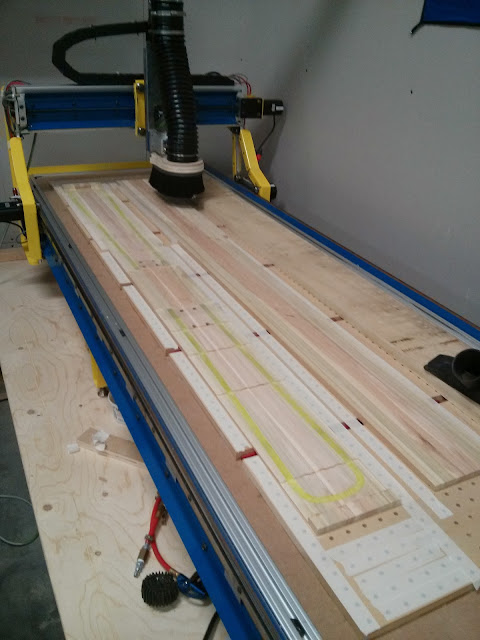 Observations of the day :
- even with white pigment the PU with ignite color is still a little bit translucent (less than with no white.. and the color is brighter)
- I'm not sure I like how the PU gets machined, while it doesn't stick to the tool when cutting it sticks to my dust shoe brush, making it less efficient. Also it seems to make a kind of dust fog in the shop, which I didn't had even when I was surfacing my CNC Table (MDF)... + it smells (not bad.. but if I can smell it, chances are something gets to my lungs...).
- I'm not 100% sure the PU was perfectly cured, maybe that explains the dust fog + smell.. It's not really soft when I put my thumb nail into it but it's definitely a rubber.

Notes on the CNC itself : I'm not very satisfied of my X axis rails... they don't run super smooth and I strongly believe it limits my top speed + it makes a really annoying noise (it's the same kind of rails on Y and Z but it seems to be less of a concern)... might upgrade for some THK rails sooner than expected.
I tried to make a drag knife from a drill blank, I'm really retarded for using a grinder... I was not able to make a "blade-ish" shape out of it so I pulled the trigger on a Donek drag knife...

today just 45 minutes in the shop but it was great : I had my 2 cores profiled at the final thickness

First I needed to make the roughing pass on the 2nd core : 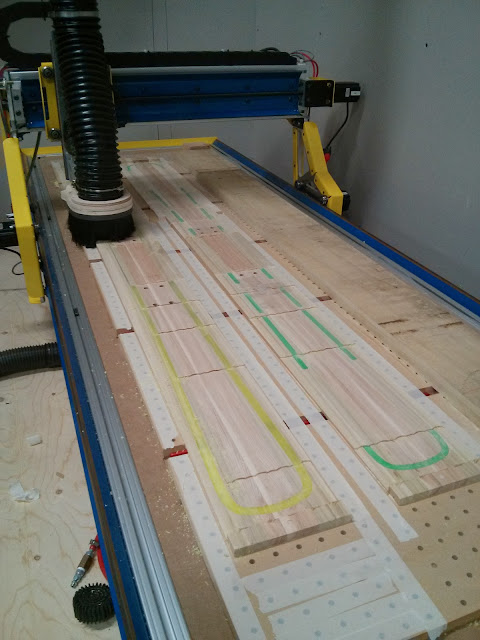 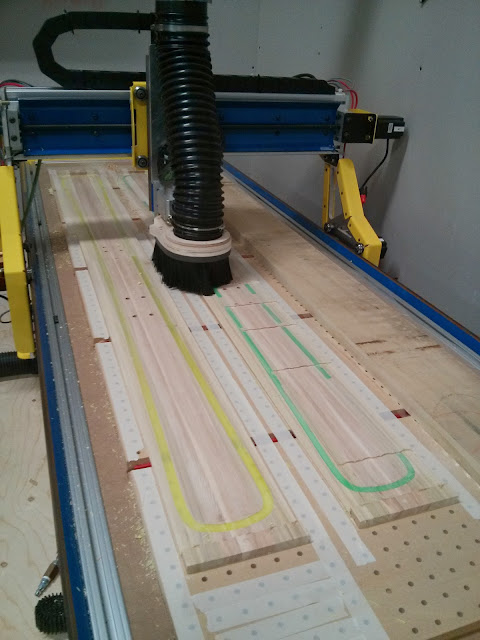 Close-up on the difference between the roughing pass VS finishing pass. The variable depth groove was spot-on ! the finishing pass (0.02") just reveals the sidewall, very little PU is wasted. 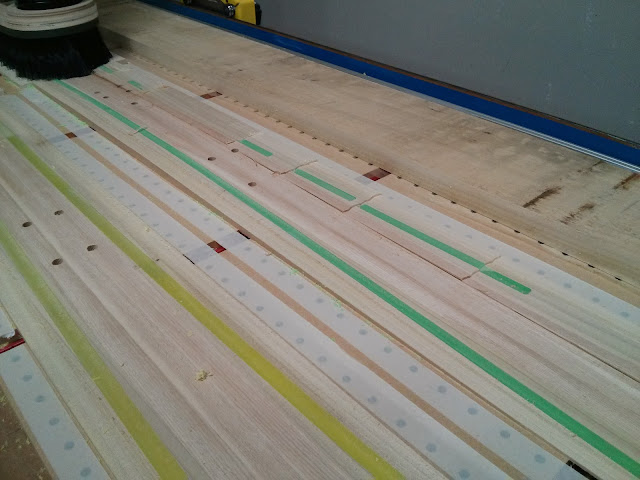 Finished cores, just need to trim them a bit and I'm done with those ! 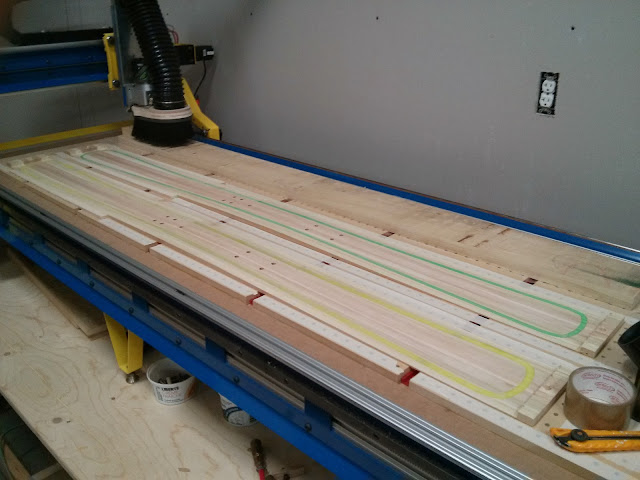 Notes of the day :
- My Dust Collection is not efficient enough, I need to work on that.
- Sidewalls are bit softer than expected... not sold on that yet.
- PU chips stick to everything, I even think it's worse than P-TEX chips since it's a bit gooey...
- since the sidewalls are soft I need to adjust my positioning method (on the casette during layup), no way I can "link" the 2 cores as I usually do... working on it now :p
Last edited by ben_mtl on Wed Mar 19, 2014 3:28 am, edited 1 time in total.
A bad day skiing is always better than a good one at work...
Top

Looks GREAT Ben! Awesome idea with the variable-depth PU pour, looks like that worked out perfect!

I'm still itching to try PU sidewalls, this is giving me even more itch. Other than the softness that you don't like, how is the surface finish? I wouldn't mind soft-ish sidewalls, but I want the sidewalls to look nice after routing (I realize profiling and routing the sidewalls are very different cutting operations)
Top

Hum.. that's a tough one... not because I don't know but honestly I don't know how to describe it... especially in English. It's not super shiny smooth for sure, I would say it's like a #200 soft sandpaper.

I don't believe there will be any problem for bonding during layup because of that "roughness".
I don't know yet how the sidewall finish will end up.. maybe someone already using this PU could tell. I would be curious to know if other PMC790 users have the same "results" I have (sticky/gooey chips when profiling, a feel that the material is quite soft, how do they like machining it on the CNC...)

The topsheet for this pair of skis is almost done , will probably send it to Miller by the end of the week. Twizz -» the topsheet design is strongly inspired from your "old" stumpysticks with the color circles, my friend does it since the skis will be for him, oddly enough when he was searching for inspiration he found a picture of the stumpysticks and said "that's what I want !"...
A bad day skiing is always better than a good one at work...
Top

Ha, awesome! I made I think 3 or 4 pairs with variations of that design. (those were the "piggy sticks")
Top

Ben...I saw your using a Donek knife on your table. I also saw a couple pics of your die cut bases, they looked really good.

we have a donek knife. I find it hard to get it working perfectly. so much room for error. our failure rate is high. Ive given up for a while while my brain stops swelling from the agony of defeat!LOL

how has it been for you?
Top

It's working OK even though it took some adjustment and the real specs are not exactly the ones advertised.

Here are some considerations on how I use it :
- I have the D1 version of the Drag Knife
- I have a script to add corner/swivel action to my tool path (in my CAD software, CamBam)
- the blade offset was advertised at 1/16", in reality I found a value of 0.087" works best for me when cutting base material (1.2mm thk), the bigger the offset value, the bigger the smallest radius you can cut...
- the "retract value" in the swivel script has a great influence too (I use 0.048" for my 1.2mm base material, 0 being the table surface)
- When doing die-cuts I always cut the male and female shapes/letters the exact same way, in the same direction, everything the same ! Even though it's not 100% perfect, the parts are identical so the fit is good.

It takes some trial and error to find the best offset value for your machine, a good starting point is to put the knife tip almost touching the table, make it rotate 180 degrees (by hand) and measure the distance between the 2 positions of the tip.. you divide by 2 and you start from here. When I first got the drag knife I cut a few squares with different offset values / retract values to find out the best combination for my machine.

Also, I would not try very small details with the drag knife..
A bad day skiing is always better than a good one at work...
Top

Thanks Ben. Good explanation. those bases you did looked really good in the pics.
Top
Post Reply
24 posts