Towards the end of last season I felt like making something completely experimental. I based my design on the Praxis Concept ski which has three main points of snow contact in the sidecut and camber profile. Reverse sidecut and reverse camber right underfoot. The idea is that the ski slides and carves equally well. Slarving we call it.

I drew up the sidecut in my CAD program which took quite awhile and I wasn't really sure how much magnatraction to give it. I never skied the Praxis ski or even saw it in person but just guessed how much sidecut deviation to give it. Skis measure out at 131-108-124 with an effective radius of 22 m, 186 cm long.

I shimmed my mold with scrap pieces of base material to make the two camber sections fore and aft of the binding mount area. The camber sections are about 2.5 mm of camber relative to the center of the ski and the overall camber is 4 mm.

Cores are all bamboo which made the build that much quicker. The bamboo is definitely softer flexing than most of the hardwoods I usually use.

For the graphics I used old logos from the Alpine Meadows ski area dating back to inception. The new owners of Alpine killed off their logo all together and are trying to make it Squaw Valley. So these graphics are basically a big FU to the clueless corporate ski world who are trying to erase decades of skiing history.

So now on to the ride report. I only got to ski these in May, June and July on old spring(summer?) snow so I didn't get to try them in a variety of conditions. I found that they didn't carve as well as I had hoped. They definitely gripped and released easily off piste and were fun and playful. At high speed they were stable on a few laps down the Chimney. But on groomers they didn't lock into a carve like a normal ski. Possibly less magnatraction would solve this and different placement of tip and tail rise relative to the sidecut.

I have a few people that want to buy them based on the custom graphics alone so I think they are being sold. I doubt I would ski these again over the other skis in my quiver. I do plan on using the same graphics for a more conventional ski for my next build. 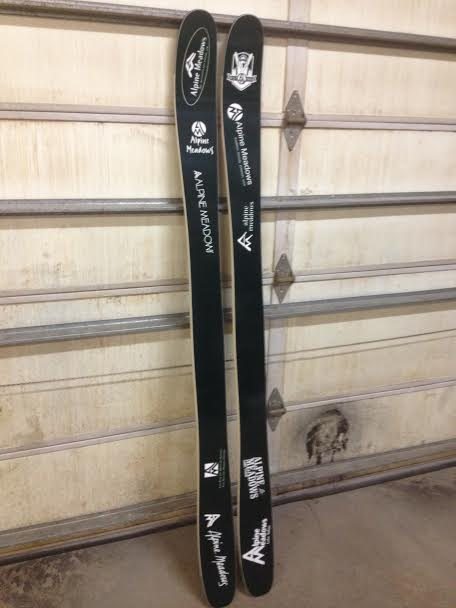 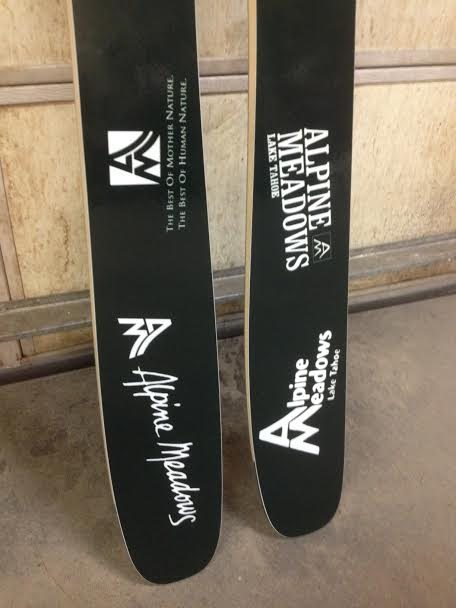 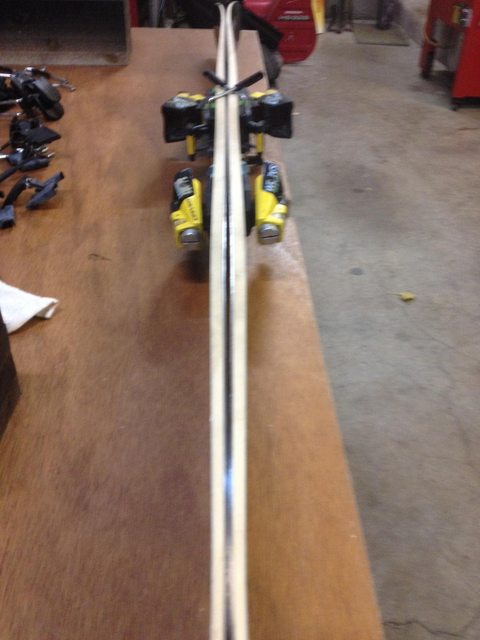 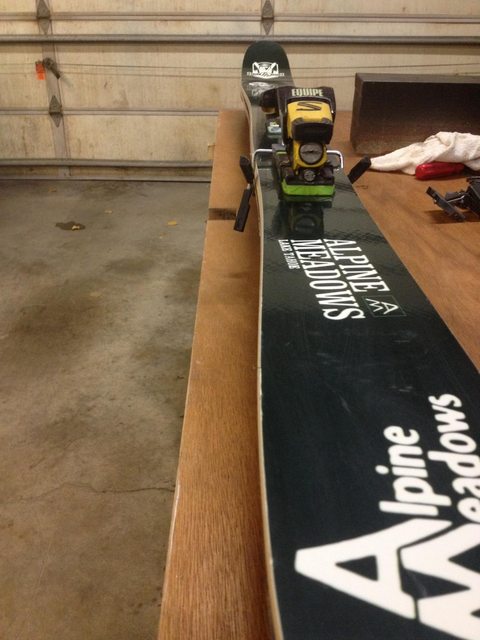 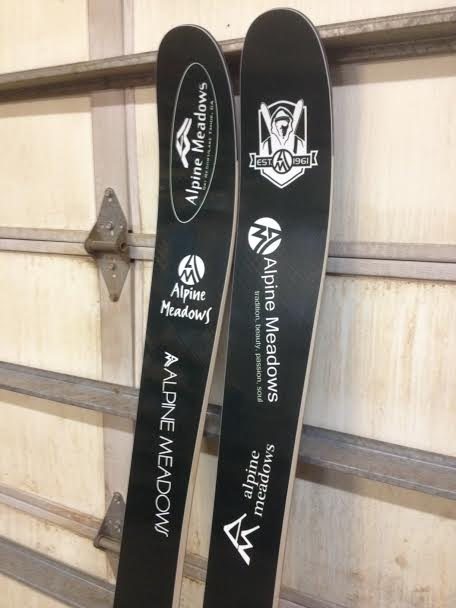 I make a lot of boards with magnatraction, never made skis though. But anyway, as far as boards go that is way too big a reverse sidecut. Most boards are now going for milder magnatraction, apart from some lib tech boards (lib tech actually made some skis with their magnatraction, i don't think they were well liked tho).
So it is better to start with a sidecut that would already hold a carve ok in good conditions and then add some mild bumps or irregularities.
You also have a big section of rocker in the middle of your ski which is also reverse sidecut so that will really get skiddish on hardpack. That same sidecut on a full camber profile would probably be fun to ski.
Magnatraction can also be negative bumps too, draw a sidecut and then draw over it in 5 straight lines, the corners will be behind the sidecut, the straights going in front of it. Round out the corners nicely and you have 5 point Magnatraction.
Top

I made a pair almost identical about 5 years back now and skied 'em till the wheels fell off.

Looks like your underfoot bump stays within the width(s) of your tips and tails yes? If so... you're good. I found as an East Coast guy the bump added a lot of stability when traversing/skiing iced out faces.

Spent a season in Wolf Creek on 'em too and (in my mind anyhow) they definitely helped with floating.

It's amazing how completely unnoticeable it is when arcing turns.

I decided to sell the last pair of Alpine Meadows Graphic skis so I came up with a new more traditional shape. I needed a pair of narrower carving skis for the hard snow that we have been experiencing thus far in Tahoe.

Cores are all bamboo and the plywood sheet I have is 12.5 mm thick and I wish it were thicker. I still think this is too soft underfoot for this stock of bamboo. This is going to be my last pair of skis I make for myself with bamboo except for maybe a park ski. I could probably stiffen them up with some carbon or some other layer but I like to keep it simple and control stiffness with the core thickness. I beefed up the tip and tails in my profile and made the tail taper to 4.1 mm and the tip to 3.7 mm. I used some bamboo for the tail spacer and for the tip I used 2.5 mm UHMW tip fill with some added layers of glass to beef it up.

I took them out today in 4 inches of new on top of hard manmade and old snow and they carved beautifully. I left the edges really sharp and they gripped really well even with only about 4 mm of camber. I've usually skied my trashed park skis when the snow is firm and icy and it's nice to have some tighter radius skis with edges again. 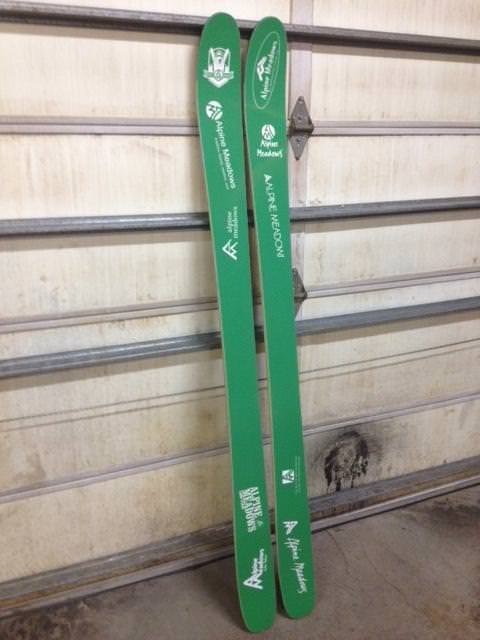 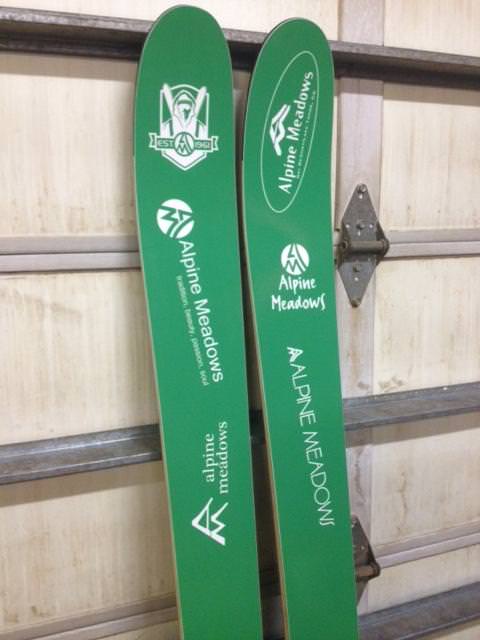 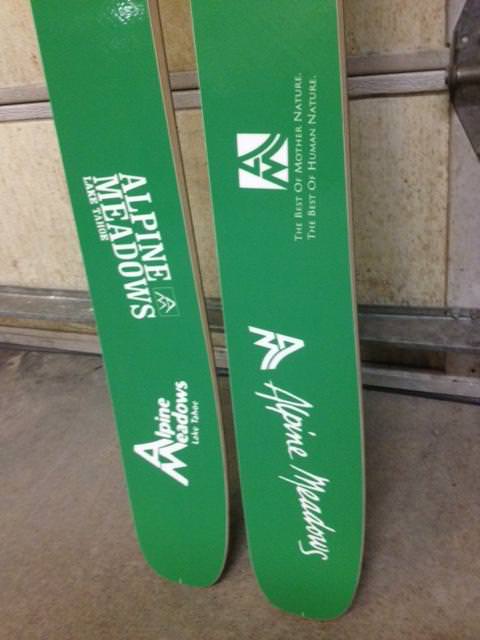 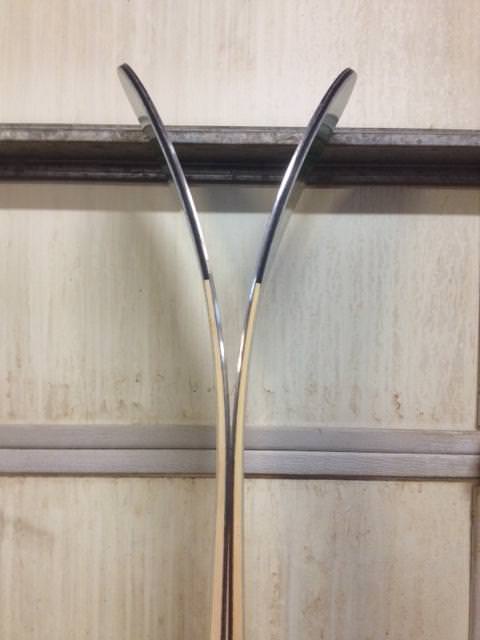 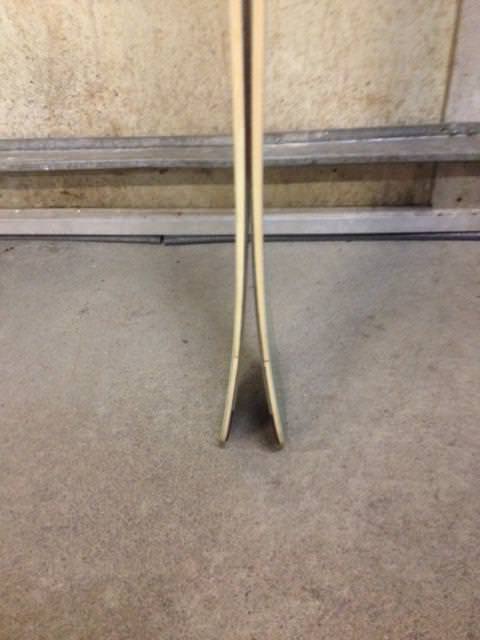 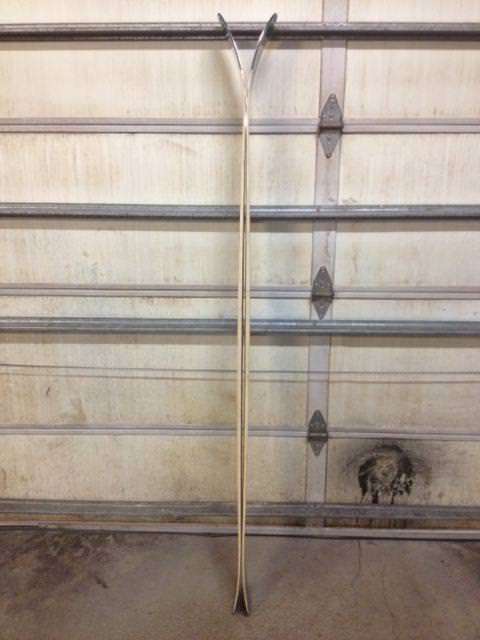 Here's a pair I made as a birthday present for my sister. I based them off the Salomons QST 92 that she skied and liked.

Length 161 cm, 120-92-110, 15 m turn radius. All bamboo core and sidewalls with a separate section of bamboo as tail filler and regular UHMW tip fill. I used bamboo as the tail filler since there isn't much tail rise and I figured it would bend fine without breaking. I probably could have used the whole core to the end but it makes layup easier if the core sits flat in the mold while I layup. Core dimensions were 3.5-12.5-3.5. I doubled up some 2.0 and 1.5 tip fill to match core thickness and it worked well. I stapled the two together after epoxy and also stapled them to the core. Everything stays nice and tight.

Sidewall is profiled at 7.5 degrees and left untreated. I tried using some Linseed oil on another pair with bamboo sidewalls and it didn't seem to penetrate much at all so I just left them as is. I find that if I am diligent about drying them off after skiing, they stay looking great.

I spent quite a bit of time designing the graphics on photoshop and am pleased but when printed they came out a bit darker than the original graphic.

I am always a little nervous making skis for someone else, especially since these were a complete surprise gift without any skier input. I was stoked to hear she loved them. 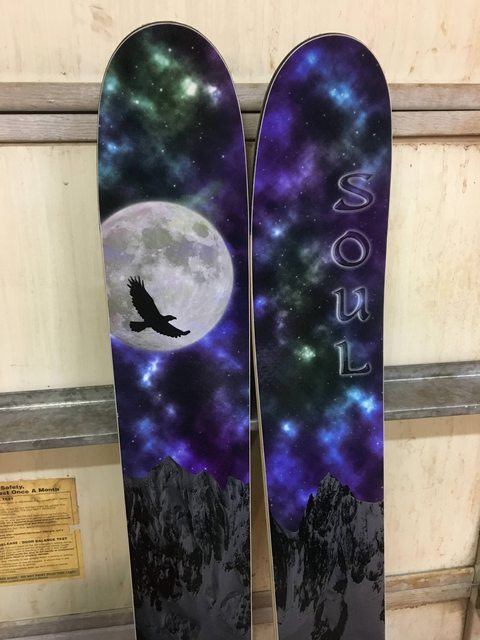 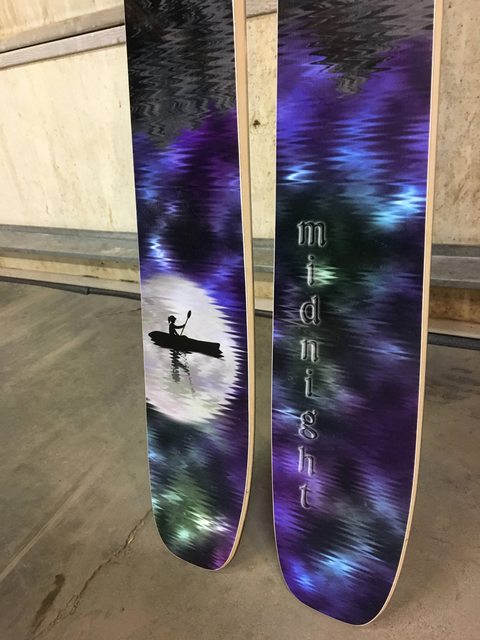 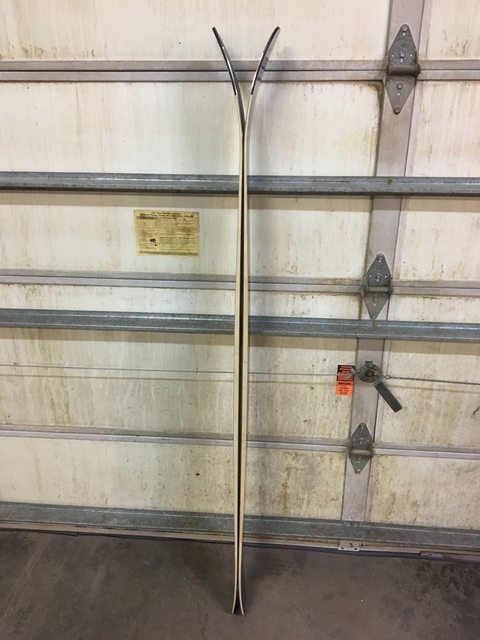 I personally love the tip rocker-camber-tail flare profile. I think it is the most versatile and makes a good do everything camber profile.
Fighting gravity on a daily basis
www.Whiteroomcustomskis.com
Top

Very nice, I see you had fun with the graphics. Great idea! Love the shape, and the tails look sexy.
I am nobody. Nobody's perfect, so I must be perfect.
Top

I finally got around to getting my contact wheel for my Grindrite ST600 resurfaced. Whether it was designed way too hard from the factory or just got hardened over the last 20 years or so, it was time to get it done. The wheel felt almost as hard as the steel platen.

I wasn't really happy with the results I was getting with the hard wheel. Belt seam marks, weird lines running down the skis from whatever crap was getting on the wheel, and just plain not grinding the base edges after they had a nice base bevel.

I sent it off to Contact Rubber Corporation and the turn around was about a month. It wasn't cheap but well worth it. They charged $480 and I also paid $80 for shipping as the thing weighed about 65 pounds in the crate. The durometer is about 40.

It was also a bit of a pain in the ass just removing it and reinstalling it as I had to remove the whole mount to get the bearings off.

The first pass on a pair of skis I knew I made the right decision. I saw sparks coming off the edges! The finish is super clean now and I can barely see the belt seam marks. I think it is just a good a finish as the $30,000 Wintersteiger that I occasionally get to tune on.

My next project for this machine is to build some type of side edge attachment. Anybody come up with something functional? I also need to figure out how to minimize the overspray. I find that when the spray is adjusted for complete belt coverage I get quite a bit of a mess on the garage floor.
Top

Got any before and after pictures? I'd be interested in seeing it.
Top

Not much to see. It basically looks the same except the new one is way softer and isn't all glazed like the old one. After I removed the old one I saw a sticker on it from Contact Rubber and realized they made the original so I was glad to see that they were the experts in the field. 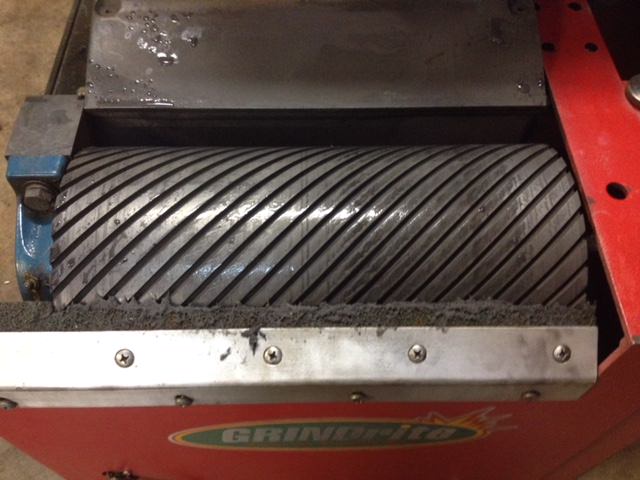 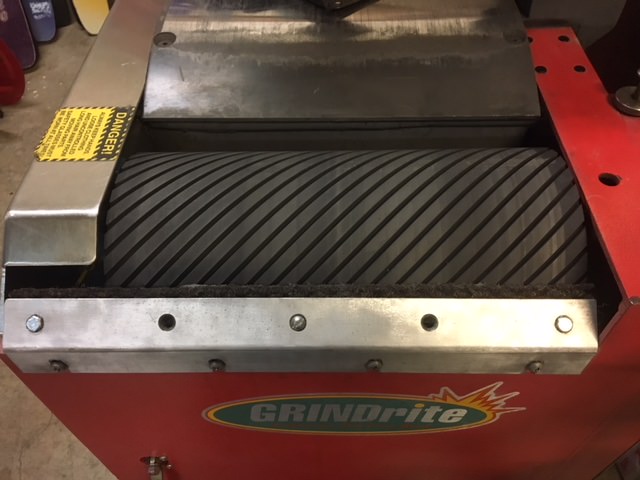 Looks like some nice new "tires" you got there. I'm sure that will help a ton with the finish of the base.
Top
Post Reply
118 posts